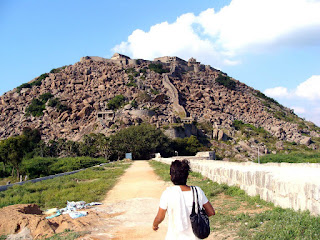 My fascination for fortress will be everlasting. I had read so much about Gingee Fort and its strategic part played in the annals of history that i made up to visit the same on 25/1/10, clubbing the repubic day holiday. We had a packed program with checking out Vellore Fort, Tiruvanamalai temple and rushed to Gingee by bus. Our anxiety began when we came to know that there is no cloak room, so we quickly took a risk and deposited our luggage in a small tea hotel. We reached the ticket counter at Gingee Fort, which is manned by ASI staff and paid Rs 5 enterance ticket per head. If we had been a little late the counter would have been closed and so our effort of reaching Gingee. So the saying goes Fortune favours the brave, but i advice my friends it is better not to take a chance. Gingee fort tour takes up an entire day almost, better to arrive early and leave early.
Route : Gingee can reached from Chennai via Tindivanam by train and bus. The total

distance is 160 km on a beautiful highway. If one likes to try an alernative route from Bangalore, it can be covered via Vellore, Tiruvanamalai and Gingee. The distance from Vellore to Tiruvanamali which is 70 kms and from there Gingee is another 40 kms. We took this route to cover Gingee.

Etymology : The name Gingee is actually pronounced as Genji, which in Tulu means Crab. Remember the main sponsorers of Fort construction were the Vijayanagar Kings. There are other versions such 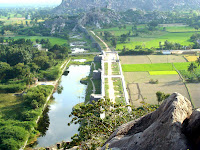 as the place is named after the Virgin sisters. Senjiamman temple is dedicated to one of the seven sisters. Another fable points towards the episode of Sanjeevi being procured by Lord Hanuman from these hillocks, to save Lord Laxman who was lying injured in the war against Ravan. The hillocks were known as Sengiri, which meant Red hills. Another tale relates the name to Singavaram, wherein Vaishnav diety is supposed to be headquartered. The most common accepted tradition is that of Senjiamman who is worshipped in one of the shrines located on the hillock. The name stuck as a dedication to this virgin diety who is supposed to have committed suicide to escape the tormentors.

Gingee FORT : The fort is spread over 3 hillocks with over 9 kms circumferance. This area being strategic was well endowed with water resources, granary, temple, barracks, Palace, Moat etc. It also contained paddy fields which were cultivated with natural rain water. There are two main enterance to the Fort, one is on the eastern sid

e called as Pondicherry gate and other on the northern front named as Arcot or Delhi gate.

The fort is originally built by Ananda Kone around 1200 AD, who were the original chieftans of Gingee. Earlier to this citadel Cholas seemed to have a strategic interest in this locale from the 9th century, may be a watch tower to protect against enemy invasion. The first citadel at Rajagiri was built by Ananda Kone and later Krishna Kone built the second citadel in 1240 AD, who was the successor to Ananda kone. Later these chieftans became feudatories of the Hoysala empire under Virasomeshwara ( 1235 - 1254 AD ). The Ranganatha temple located on the Rajagiri hills seems to have been constucted during the Hoysala period. There is one more temple known as Kamalakanni Amman enroute to Rajgiri.

Venkatramana Temple : This temple was built during Vijaynagar times. It was built by Muthyalu Nayaka ( 1540 - 1550 AD ) This massive temple has a huge gopuram and

a mantap in front of the temple where a pond would have been located in ancient times. After the fall of Vijaynagar empire in 1565 AD, many of the subsidiaries re-located to different places such as Penkonda, Chandragiri and Gingee. Gingee must have been a partial storehouse for the treasures accumulated by the kings. The Nayaks who were subsidiary of the Vijayanagar protected the royalty and continued to rule this territory.

Meanwhile Nawab of Arcot started gaining prominence with the headquaters at 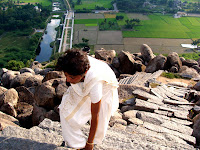 Arcot. Raja Desingh ( 1714 AD ) who ascended the throne at Gingee rebelled against the Nawabs and refused to pay tax to his overlords. He was brutally defeated by the Nawabs and the entire fort was taken over. The heroic Desingh was given a decent funeral with his wife committing sati on the pyre of her husband.

Some monolithic pillars well carved were taken away by the French to be relocated in Pondicherry to be used as decor for Dupleix statue, who was the governor during the French occupation of Gingee in 1761 AD.

Palace Complex : Who destroyed the palace complex at Gingee seems to be mystery which needs to be solved. In 1676 AD Shivaji maharaj captured the forts of Vellore and Gingee. Gingee served as Maratha capital for 9 years during the war period. Some of the wealth was obviously taken away by Shivaji to strengthen his empire. He installed Desingh ( Tej singh )who belonged to the Maratha clan. The 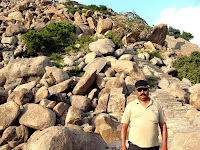 Nawabs of Arcot, who were descendents of Bijapur sultans obviously occupied the Gingee after defeating Raja Desingh. In 1674 the sultans of Bijapur raided Gingee and almost destroyed majority of its edifices. It was a deadly blow to the sprawling capital of Gingee. The palace seems to have been destroyed during the warfare with French by the Nawabs with cannon fire. All the remaining wealth was looted by the French, some were salvaged by the Nawabs. The palace naturally became a target of vandalism by the French soldiers who conquered this place. The French handed over this territory to Hyder Ali and Tipu Sultan in 1772 upto 1790 they reigned along with the help of the Nawab of Arcot. Subsequently after the defeat of Tipu sultan, the British took over the FORT, and by 1823 due to insalubrity of this area they vacated the Fortress and it was in ruins by 1823. The British had a firm base in the form of Fort St George.
Venugopalswami Temple : This temple is located near the western gate of the Inner Fortress. Besides the temple is the Kalyana Mahal which is a multi-storeyed building with pyramid type of rooftop. This edifice was used to preserve grains in a dry condition in certain chambers. It was also used as resting place during the torrid summer for the royalty.
Venkatrama Temple : This temple is the largest edifice with the Gingee fort complex, and the temple was constructed by Muthyalu Nayaka ( 1540 to 1550 AD ). The complex contains number of Tamil inscriptions revealing the endowment to the temple. Many of the pillars were pillaged and taken away to decorate Dupliex statute in Pondicherry.
Overall a visit to Gingee fort will unfold history like never before, from the Jains,Hoysalas, Vijayanagar emperors to Nayaks, Desingh, Shivaji, Mughals, Nawabs of arcot, French, Tipu Sultan and the British. One requires to be prepared for a hard trek uphill, better be prepared with Sunscreen, Salt and glucose and bites to recoup. Umbrella and cap would protect one s skull from being overheated. The entire area is desolated and reminds one of the numerous wars fought in the surroundings
Posted by De Guide Travelouges at 7:25 PM