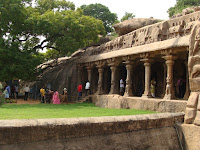 It was a news to me when I read that Mahabalipuram was built on the wealth amassed from destruction of Vatapi by the Pallavan King. The capital of Chalukyas was Badami ( Vatapi old name ) which was ransacked for its supreme wealth and grandeur. Mahamallan Narasimha Pallavan defeated the Chalukyan emperor Pulakesin II in the battles of Manimangalam and Pariyalam in 642 AD. Pulakesin II died defending his capital on the battlefield. The rivarly between the Chalukyas and Pallavas seemed to be legendary with constant warfare between them for supremacy of reign over the South. It can be assumed that booty looted from Badami was so tremendous that it had to be carried by a caravan consisting of 20 elephants and 80 horses. A store house was built by Mahamalla to safely protect the jewellry in Mahabalipuram.
Modern historians point out that Pulakesin II marched with a huge army in 620 AD and defeated the Pallavan king Mahendravarman and looted the wealth of Kanchi. This scenario seems to be unlikely, since Kanchipuram possessing that sort of wealth base was impossible. Whereas Badami and surrounding areas were filled with gold and diamond mines. The only place where gold was available was Kolar, which was ruled by the Ganga dynasty. Further on my visit to Kanchi i found that most of the monuments in the temples were intact, some have crumbled due to aging rather than loot and arson. It is therefore highly improbable that Pulakesin II came with the idea of looting the wealth of Kanchipuram. Being patrons of art Chalukyan emperor Vikramaditya who defeated the Pallavas once again in 674 AD to avenge their defeat did not resort to enmass destruction, if it were to be true than entire Mahabalipuram would not have remained so.

The Pallava kings had established Mahabalipuram as a sea port to have trading links with China, Arabs and Greeks. Infact the antecedents point out to trading links to earlier times with Roman empire and later to European. It can be pointed out that Pallavan kings were inspired by Chalukyan architecture and wanted to surpass them in their own capital and nearby areas.

Mahabalipuram was an ideal locale with plenty of granite available with skilled artisans to build an edifice of mammoth proportions. The symbol of Lion & elephant was used to display the power of the kings. Thus began the chiselling of the hillocks in the fashion of Badami, which had set the trend. The Mahabharat and Ramayan became an ideal background story for the artisan of times to display their chiselling skills. In fact I strongly suspect that many artisans from Badami migrated to Mahabalipuram in the absense of sufficient work after completing the edifices at Badami.


This place was earlier referred to as city of SEVEN PAGODAS or placee of seven temples. But unfortunately Tsunami in 1341 AD seems to have submerged the majority of the Pagodas and Palaces built around the seashore, with element of nature sparing only one seashore temple for future generation to relish. How ironic, another Tsunami in 2004 has helped to uncover the remains of lost monuments.


Monuments of Mahabalipuram received world heritage status in 1984 from UNESCO. This propelled action for resurrection and maintainence of the open air museum. In 1991 when we visited Mahabalipuram in the peak of summer, it was scorching heat, which refrained us from thoroughly exploring the site. But we saw a sea change with greenary embedded into the site, which made it more pleasant. An umbrella is must to cover the entire stretch of monuments to protect oneself from searing heat. 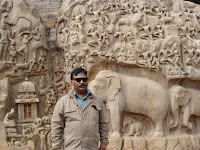 
ARJUNA'S PENANCE : It is biggest Bas relief monument in the world, hewd from a monolithic rock. The entire structure was devised with a concept of open air theatre stage. Just imagine a drama being unfolded in front of an audience. The pandav cave which is situated besides acts as an indoor stage and the bas relief acts as an outdoor scenary.

I wonder why this masterpiece is called Arjuna's penance, there is sculpture of an old man ( Arjuna ) standing on one foot with ribs exposed praying to Lord, presumably Shiva to grant him the boon. ( Arjuna is presumably praying for the mighty Pasupati weapon to defeat the Kauravs ) The entire facade is filled with wild animals such Lion, Elephant, Deer, Serpants, and even domesticated animals like cat and mouse. It can be compared to a comic strip or ancient form of story telling. Another theory is that this bas relief is actually a personification of the poet Bharavi's masterpiece Kiratarjuniyam

Adjecent to the main relief there is a sculpture of monkey checking lice on its baby's head, which represents the real jungle scenario. The rest of story seems to be untold as it were. The headless sculptures is obviously vandalised by some treasure collector. Some historians ascribe the headless figures to the Pallavan king Mahendra Varman and others. 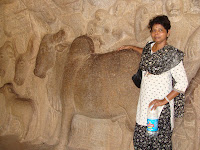 The cave adjescent to Arjuna's Penance bas relief is called Pandav Cave. This cave is largely unfinished and resembles a Buddhist vihara. The sculptures on the wall resemble a crowded market place, with various human forms and scenes from the life of a farmer with milking scene being the centre of attraction. On the right side one can assume the characters from Mahabharat.

This cave is located adjescent to Pandav Cave towards the left. Basically this cave too resembles a buddhist vihara which may have been converted to Krishna's cave. The life style of Krishna is depicted with cattle being the centre of attraction. Lord Krishna is depicted as effortlessly lifting the Govardhan mountain, along with female cowherds. It depicts a typical rural atmosphere.

There is a scene of lovers holding each others hands in unison apart from the flora and fauna of the jungle. Thus the love for nature is abundant among the artisans of the times. 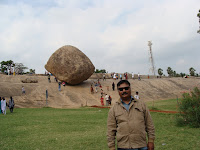 A huge chunk of rock situated on the hillock looks like a butter ball on a typical masala dosa. This rocky structure is a photo shoot location for couples, students and family members.

In fact the rock looks to be precariously oscillating and about to trickle down, but it is firmly embedded with a flat surface. It is obviously an optical illusion created by nature. It is located to the north of the Arjuna Penance. The land in front has been beautifully landscaped with grass and trees. It was earlier barren and used to emit lot of heat making it a natural sauna centre.

This cave temple lies just behind Arjuna Penance. The pillars are beautifully designed with Lions or wild boars anchoring the structure. The cave seems to have been scooped out of a rock surface.

Inside the cave one can find varha depicted to represent Lord Vishnu. All the 10 avatars of Vishnu is being exposed with wild boar being the prominent one, implying the branding of the cave. 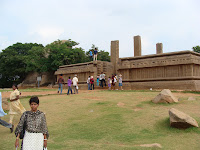 An unfinished agenda for constructing a massive tower on the edge of the hillock. This gopuram belongs to the Vijaynagar era, wherein the attempt was made to construct two gopurams signifying the granduer of the era. It may have been left incomplete due to the lack of sponsorship after the collapse of Vijaynagar empire.

This Gopuram seems to have been commissioned by Krishnadevaraya during the fag end of this reign in 1528, to glory the reign of his empire. He died leaving leaving behind the unfinished gopuram on Mahabalipuram and the later rulers did not have the inclination to finish the majestic structure. If only this gopuram along with the gopuram in front of the Vishnu temple had to be completed the granduer of Mahabalipuram would have scaled the heights of Hampi or even the Sphinx.

This complex was a part of the grand seven pagodas. The credit for construction of the shore temple should go to Pallava King Rajasimha ( 700 - 728 AD ) This temple which is situated bang on the sea shore is dedicated to Lord Shiva. This structure may have inspired Raja Raja Chola to build his Bri 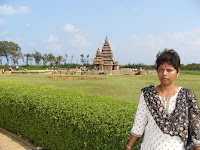 hadeswara in a grandeur scale. The architects of the yesteryears were obviously aware of the vagaries of the nature and naturally the temple was designed to deflect the wind velocity and soak up the heavy rainfall.

The entire structure withstood the ferocity of the Tsunami speaks volume about the rigidity of construction. It seems to be literally built out of the rocks outgrown from the sea bed by reclaiming some land. Such formation can be seen if one visits Kaup, which gives an idea of the converting ordinary rocks into extra-ordinary monuments. The outer enclosures are filled with Nandi and Lion which may be a later addition to add value to the monument.

On the precints of this shore temple miniature shrines dedicated to Lord Shiva have been excavated by ASI. This was accidentally discovered in 1990. The wild boar has been vandalised. Has it been subject to ransacking by the Chalukyan king. It is most unlikely despite some historians claim. Some claim that Vikramaditya I ( 655- 681 AD ) and avenged the defeat of his father Pulakesin II. He exacted revenge by destroying the boar symbol, which was sculpted in prostration to the Pallavan rulers. Hence the Chalukyan emperor must have hacked it. It was subsequently restored by the rulers or ASI.


Posted by De Guide Travelouges at 2:27 AM