According to hindu beliefs planets impact each and every individual right from the moment of one's birth unto his death. If one takes the re-birth theory into consideration, the previous birth also influences life on earth in the current birth.

Location : How to cover Navagraha temples which is spread over distance of 200 kms in round trip. If one is travelling by train one has get down at Mylatdurai and cover the eastern portion of the trip including chidambaram and Velankani. Then move to Kumbakkonam and cover the rest of the Navagraha temples. Otherwise if one wants to cover only Navagraha temples it can be covered from the base of Kumbakkonam. It is best to hire a cab to quickly cover all the temples, otherwise one may require as many as 4 days by bus.

According to traditional belief, Saint Galava was a famous astrologer who derieved his knowledge after performing penance at the foothills of Vindyas. He found on examination of his own horoscope that the evil influence of planets was affecting his health. He decided to get rid of the Navagraha Dosa caused by the Planets. Thus he requested the royalty to commission construction of the Navagraha temples. Thus he and his descendents got rid of the evil influence of the planets.

While on journey we met a Rajasthani family who were advised by their guru to undertake 3 trips to get rid of the Guru dosha. The intricacy of the trip was divided between the sisters and brother. The belief was strong which would help the sisters marry and brother to get rid of his problem in his business.

SURYA TEMPLE : This temple is dedicated to the Sun (star) around which all other planets revolve. The influence of weaker Sun would lead to diseases such as Typhoid, Lack of strength in bones, Eye problem etc. The prescribed remedy according to the priests are in form of fasting on Sundays, donating a cow and worship of Surya.

This temple is located 12km away from the base town of Kumbakkonam and the nearest Railhead is Aduthurai. 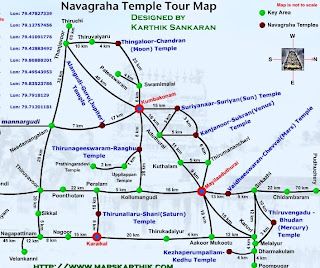 This temple even though not very impressive in construction has all the nine Grahas surrounding the temple. All the navagrahas are small mantaps, which are miniature and built in a jagged manner. One circumabulation around these temples will help a devotee to mitigate his doshas.

This temple is built courtsey Chola King Koluthunga during the 12th century, which has been renovated many a times due to crumbling edifice.

SUKRAN : This Shiva temple is dedicted to planet Venus. Planet Venus dosha leads to lack of harmony in married life, diseases arising out of cold etc. The remedy for warding the evil effects of Venus suggested is by wearing diamond jewellery and giving bengal grams, white dress and silver article as gift.

This temple is located 18 km away from Kumbakonam. After visiting this temple one can proceed to Suryan temple.

RAHU TEMPLE ( Thirunageshwar ) : This huge temple is built by Gandaraditya Chola son of Parnataka chola I. It is spread over 15 acres, towering Gopurams and several mantaps. There are as many 12 theertams in this place.

Rahu Kalam is generally an inauspicious time, wherein no constructive activity should begin or inaugrated. It is better to avoid the influences of the planetary dichotomy. Generally Rahu influences stock trading and speculative activity. Remedy for Rahu dosa is in the form of wearing gemstone which honey coloured hessonite. One can get rid of their evil effects by feeding the ants too.

The location of this temple is approximately 6 kms away from Kumbakkonam.

CHEVVAI or Vaidheeswaran Temple : This temple is associated with the zodiac planet of Mars. This planet influences Aries and Scorpian zodiac, which is normally for 7 years. The general troubles associated with this planet are rift with siblings, repayment of loans associated with house and land, rheumatism and arthritis, late marriage, healing of wounds, tumours, fractures etc. Gnerally the mitigation is ensured by praying to Lord Ganesh, wearing red dress and gemstone.

LOCATION : This temple is located approximately 13 km from Mylatdurai. The route is enroute to Chidambaram via Srikali. Chidambaram is 23 kms from this place.

This temple is quite huge with fortified walls. The temple is guarded by Bhairava on the East, Veerabhadra on west , Ganesh on the south and goddess kali on the North.

The principle diety is Lord Vaidyanathar. The temple is dedicated to Mars planet. Lord Shiva is worshipped only after midnight.

The temple is of ancient origin and it has been renovated from time to time by Vikrama Cholea, Vira Rajendra Pandya, Achyta Nayak and Maratha prince Thulaja. The temple stands right in the middle of the town, with a beatiful gopuram, and the rays of the sun falls on the linga on a particular day of the year for a few days. The sacred tree associated with this place is neem tree ( margosa ) which has special medicinal properties. The original shrine is located under the neem tree. It is believed by throwing jaggery chunk into the pond ensures immunity for all the maladies.

There is another temple at Sirukudi where the ruling diety is Mangalanayaki, which is known to cure disease, even the Muslims visit this temple.

Srikali temple is another famous temple located approx 3 kms away from Vaidheeswaran temple. It is famous for the birth place of saint Thirugnana Sambhandar, first among Shiv Sama Acharyas.

Budhan Temple ( Mercury ) : This temple ( Tiruvenkadu ) was closed on account of death of a family member related to temple trust. We could not visit the temple which was closed for mourning. Mercury is considered lord of knowledge.

Budha dosha is generally for 17 years, and is the lord of Virgo. Generally mercury influences an individuals education stature. Fasting on Wednesday, giving gold as gift, chanting of Vishnu mantras, ensures placating the budha dosha.

The temple is located under a banyan tree. The mother is worshipped by childless couple for blessing them with an issue. Sukravara Amma is also worshipped in this temple.

Those wishing to be blessed with a child should take bath in all the three tanks for fulfillment of their longing. He who takes bath in the waters of all three tanks of Thiruvenkadu shall bear children and their wishes shall bear fruit.

Location : This temple is located 10 kms from Srikali temple and approximately 32 kms from Chidambaram. Better to visit Chidambaram and on return one can visit this temple since Chidambaram Nataraja temple closes at 12.

KETHU TEMPLE ( Keezhaperumpallam Temple ) : This temple can be covered depending on the timing if one is on the round trip after having lunch. One can visit Poompuhar museum and beach and spend their time accordingly. The Dansborg fort is located nearby too, which is known as Tarangalpadi, which too has a beautiful beach.

Kethu determines whether one will attain Moksha or not. Generally kethu affects one for 7 years. Kethu blesses one with wisdom, graces with good children, and bless one to live in a foreign country. Ketu cures leprosy, TB, skin disease and fever.

There are mythical tales of a snake whose life was not fully ebbed. Lord Shiva seemed to have sucked the poison from the snake. The snake begged for forgiveness to retrieve its venom.

SHANI TEMPLE ( Saturn ) : This temple is also known as Tirunellur temple. This temple is dedicated to SATURN. This planet influences one for 19 years. He is the lord of constellations of Capricon and Aquarius. It also determines the longevity of human being. Those who are perturbed should worship Lord Hanuman and Lord Vishnu to get rid of their fear. They should worship with Til oil, donate yel, wear blue stone ( amentyst for acquarians ) and a dark dress. Once they worship at Tirnallur most of their problems will diminish.

The temple is located in Kariakal, which is under the jurisdiction of Pondicherry. Booze is available in plenty which is sold cheap due to lower duties. It is around 8 km away from kariakal town. Now one can decide whether one would like to proceed towards Velankani or towards Rahu temple depending on the belief.

We were unable to cover GURU AND CHANDRAN during our visit maybe next trip we will be able to make up the rest of the Navagraha ciruit. We were able to cover thiruvavur and saraswathi temple enroute back to our base town at Mayilatdurai.

Posted by De Guide Travelouges at 3:36 AM