Brihdeshwar Temple has been declared as world heritage site in 1987 AD. The temple is located in the rice bowl district of Tamil Nadu, Thanjavur. It is close to the railway station and old bus stand. The nearest city is Trichy which has an airport and railway junction. 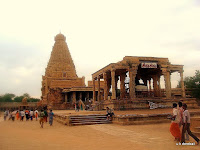 Raja Raja chola ( 985 – 1014 AD ) was one of the greatest emperors of the Chola dynasty. By birth he was known as Arulmozhi Verman, the third son of Parantaka
Sundar Chola. He was trained to be a warrior to lead the cholan army in conquest against the Pandya and Sinhalese kingdoms. Aditya Chola II, the eldest son was murdered under suspicious circumstances. The theory is that he was murdered by the concubines with snake venom while engaging in an orgy session. This was a conspiracy hatched by the vanquished Pandyan King ( Vira Pandya )supporters, whose beheaded skull he paraded on the streets as a victory sign. He was succeeded out of turn by Uttama Chola ahead of Arulmozhi. This was under a explicit understanding that the paternal uncle will be succeeded not by his son but by Arulmozhi ( Raja Raja Chola ) But eventually blood turned out to be thicker than water, as years went by the promise was conveniently brushed aside. When he came to know regarding the conspiracy, he adopted the same trick with the help of his guru Bradbahu. The uncle and nephew were got rid of by the concubines dishing out drinks laced with poison.

Raja Raja Chola was constantly engaged in battle with Chalukyas in the north, Pandyas in the South and Sinhalese across the shore. One day while he was engaging in the battle in Sri Lanka, he saw huge statues of Buddha. He was inspired by this beautiful statue to dedicate the Brihdeshwar Temple to his family deity Shiva @ Thanjavur. He commissioned the construction of the huge temple in 1004 AD. Since the scale of construction was unparalleled in the history of temple construction of the times, it took almost 3 decades and it was completed by his Son Rajendra Chola in the year 1034 AD. Rajendra chola I ( 1014 – 1044 AD ) credited the construction of the temple to his dads name even though majority of the construction was undertaken by his patronage. He in turn looked to leave his imprint on the sands of time elsewhere in Gangakonda Cholapuram. 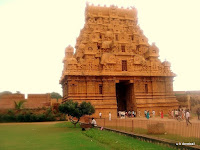 According to some historians the chola King was suffering from leprosy and he requested his Guru Haridatta to find a solution. The cure recommended to atone the sins included building of Brihadeswar temple,with a tall gopuram. Accordingly a search was launched to locate the linga. The search team managed to find a phallus shaped stone on narmada river bed which has shipped back to Thanjavur. This very statue started gaining height and therefore it came to called as Brihadeswar.

The temple seems to in all probability built in phases, in his final year of reign, an incomplete temple seems to have been commissioned since Raja Raja chola was on his death bed. There are some historians who claim that the temple was completed during his time, but historical evidence points out the complete structure had taken more time. In fact some additions were even made during the time of the Nayaks.

The unique feature of the gopuram is that its shadow does not fall on the the ground at any part of the day. There is also enough space on the khalasa area that a Maruti can can go around it in circular fashion. A painting of Raja Raja chola has been discovered recently with a Jamician rustafero type of hairdo along with his Guru, which is probably the only available picture of the great King.

The temple complex was built on the banks of the river cauvery, with its water diverted to the moat. The walls around the temple was constructed in the form of fortress, to protect the temple from invaders. Even today the temple has one of the highest gopuram ( 66 meters – 216 feet ) in India. The Kalash ( shikara ) which is installed on top of the Vimana weighs a massive 81.5 tonnes. A ramp was constructed from 6 kms away from the temple complex to roll over the huge shikara on to the gopuram. The entire temple is built with granite which was not available in the area. Probably it was transported from Trichy Rockfort area which is located 40 kms away. The inspiration to create the magnificient edifice seems to have been inspired by the Chalukyan architecture with local aritisans. The gurus advice to atone for the sins in the form of bloodshed of his rivals to the throne, by building an edifice to Lord Shiva.


The temple complex consists of pillarared complex surrounding the massive temple, with small enclosures, where the mural paintings are sketched. Incidents from the Nayanars family are depicted in the paintings, pertaining to their ceremonies and daily lifestyle. There are also paintings displaying 108 postures of Bharathanatyam dances.

There is a pillared matap containing a Bull or Nandi before the main temple. This Nandi seems to bless the women with fertility and the rumour has it was cordoned off by instruction of highly influential leader, so as not to promote population explosion.

There are two subsidiary temples built behind the main temple which is now closed for public visit. One more temple which is under renovation contains mural paintings on the ceilings of the wall. By ths side of the main temple there are serveral smaller shrines are located. One of them is dedicated to Lord Subramanya or Kartikeya,son of Shiva. Another shrine is dedicated to Brihannayaki, the goddess is situated between Nandi temple and the main shrine. A shrine of Vinaygar ( Ganesh ) is located on the south western corner, another is of Nataraja on the north eastern corner, and chandikeshwara on the north western portion of the temple complex.

Bridheswar temple which is dedicated to Lord shiva is built on six tier level construction. On the first floor there are mural paintings on the edifice and walls which is restricted to public visit. The secret enterance is blocked for public entry, which can be accessed with permission.

Currently the temple is under the ASI, which is declared a World Heritage Monument in 1987. Thankfully it has saved the temple for total modernization with mindless painting. The old heritage is maintained under strict supervision from the ASI. It is however surprising though why are poojas being allowed in the temple which is supposed to maintained as heritage structure.

Originally the Cholas introduced an elaborate system of administration of the temple. The major part of the expenditure of the kings revenue collection and plundering of the enemies, wealth went into maintainence of temples. The priests, artisans, accountants, actors, dancing masters, flute players, jewelers, singers, dancing girls, washermen, guards and various other staff were part of the paid employees of the king. It is alleged there were 400 dancing girls under the role of the temple. The source of funding was from donations from public and merchants and through contribution by the king.

The architects and workmen who were engaged in making of bronze castings were used to construct the temple. The Vishwakarma Brahmins were employed in sculpting the statues, which are similar to the Bronze statues produced by them in ancient times. The Master craftsman's name is SOMA VARMA. Many of the artisans from the Chalukyan area were used to complete the fine carvings on the temple façade due to their expertise. This was possible due martial alliance forged with Chalukyas, with marriage of Raja Raja Chola’s daughter Kundavai with Vimal Aditya of Vengi.

Raja Raja Chola had number of wives, chief among them was Loka Maha Devi who occupied the centre stage. The official son of Raja Raja Chola was Rajendra Chola who is progeny of Vanavan Maha Devi. He was blessed with 3 daughters as per record, they are Kundavai, Mahadevigal who adopted Buddhism and remained a spinster. The number of official wives mentioned in the inscription are 8 in number. The unofficial concubines in form of dancing girls may outnumber them. However, Raja Raja chola seems to be influenced by his elder sister, who seem to have influenced his character and decision making.

Luckily the temple of Brideshwar had survived the Islamic invasion of Mallik Kafur, Thuglak, Aurangazeb and Tipu Sultan may be because of the abandonment of the territory. Rajendra Chola shifted his capital to Gangaikonda Cholapuram from Tanjore. The 400 dancing girls may have once again played an important role in protecting the chastity of the temple.

Location :
Brideshwar Temple is located at Thanjavur which is 58 km away from Trichy. One can reach by train from Chennai, Bangalore and Madurai. The nearest airport is Trichy.

Free Entry, No camera Fee, Only parking fee is charged for vehicles. No barrier of visitors, foreigners are welcome into the sanctum too by eager priests.

A renovated palace of the Chola Kings was undertaken by the descendants of Marathas. Serfoji reign lasted from 1798 till 1832. During his reign he had built Chattrams, Saraswati Library, which contains 4000 books from different parts of the world. There are number of ancient manuscripts in this library.

Various collections, artifacts which are collected across the globe are available in the palace museum. The number of entry tickets and camera fees is more than 4 which seems to expose the greediness. The palace premises are maintained in absolute shabby condition considering the amount of fees collected. An ancient tower with a bronze bell, museum with whale bone, and secret tunnel from the palace are the highlights. There is also a palace antique selling counter, which sell copy of the various artifacts. There is a government museum in the adjacent premises, which has lot of artifacts collection.
Posted by De Guide Travelouges at 9:25 PM