Marina beach is the widest beach in the World

The beach stretches from Fort St. George in the north upto Besant Nagar, Adyar South a distance of nearly 12 kms. The entire stretch of nearly four kms is well maintained with pedestrian footpath and two way traffic. There are two memorials for DMK founder C.N. Annadurai and AIDMK founder and legendary actor M.G.Ramachandran. Apart from these monumental structures, there are number of statues installed on the pavement such as M.K Gandhi,

Delete Photo Thiruvalluvar, Actor Shivaji, and Symbolic statue of Labour. The promenade along the beach area is known as Kamarajar Salai.
Marina beach precincts have been used by political parties to conduct meetings to address vast assemblage of crowd in the past. The beach can easily accommodate more than a lakh comfortably. Generally the meetings were held during the night in floodlights. . There was a permanent stage known as Seerani Arangam which was demolished by govt. Ms Jayalalitha, ex CM of T.N. inorder to maintain the beach environs. The crowd would assemble to enjoy their outings more so because of the eateries dished out by foodstalls on the beach. My favourite dish was sundal ( made out of boiled kabuli channa with mango slices ) in olden days. Tenga Manga Patani Sundal...screamed the vendors. 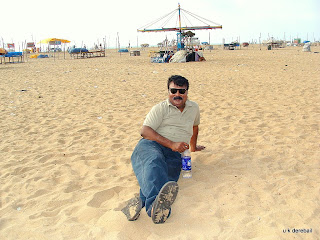 Nowerdays one can relish very economical fried fish and prawns with local masala added to taste. The oil content may not be healthy in lieu of re-used oil. But nevertheless a small quantity is quite tasty because of the freshness of the fish. There is a vendor who sells fresh water dug out of the beach sand. The water surprisingly is potable and not very salty. He charges Rs 5 a bottle, once again, one may feel slightly perturbed drinking the water but it is perfectly safe. None of us fell sick after drinking this water proves the fact that water is consumable.
One finds plenty of youngsters use Marina surroundings to play tennis ball cricket in the mornings. If one wants to have a drinks break, the vendors are ready to serve tea, coffee, cold drinks, mineral water, lime soda etc to quench the thirst. There are plenty of food stalls who carry out brisk business from evening till 8 pm in the night.

Jogging and morning walkers hit the beach pavement regularly. The idyllic setting with plenty of parking facility lures young and old to Marina beach. In terms of privacy Marina beach offers plenty of space, newly married couple and lovers throng Marina beach. Very few people venture into the water for swimming since the currents are strong and it can be risky, and unfortunately there are no bay watchers too for rescue act. However our bravehearts Mazhar and Azam literally splashed themselves in the waters for sake of photography session. They even requested Santosh and myself not to post some of their bare chested photos. Lol

There are merry- go- around and other make shift play themes for children on Marina. In fact these fabricated play themes can be a good shoot ops. We clicked plenty of photos with their background. One greedy guy wanted to fleece us and he shouted at us. Luckily I intervened and checked with him, he wanted Rs 5/- for using his equipment for taking photos, I obliged and he was happy.
Artificial Waterfall : In Sept 2005 a 34 feet tall artificial waterfall was inaugurated as a part of the Chennai forever initiative. The project was commissioned with a budgeted expense of 15 lakhs
Aquarium : A small aquarium is located near the memorial which displays different species of fishes. An entry ticket is charged for tourist.

On DEC 26, 2004 Tsunami battered the Marina beach leaving 206 people dead, but spared majority of the tourist since it stuck early morning at 8.30 am. But we found that the traces of fear had almost vanished among the visitors. Marina is really a symbol of the Chennaites spirit of survival amidst adversity. If one is lucky, one can have a view of sand castles and artistic structures and figurine of religious gods neatly etched on marina sand.

Epilouge : Many a love stories have been witnessed by MARINA BEACH and the sands of time will witness many more to come. Maybe the seeds are sown for many more reviews on this lovely destination.
Posted by De Guide Travelouges at 9:14 AM