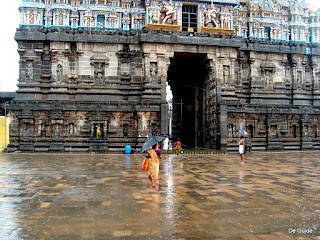 We set out from Maylathdurai by hiring a cab for a round trip beginning with Vaitheswaran Koil which is one of the navagrahas, the weather which was calm started showing its true colours. When we reached Chidambaram, the rain gods started pouring like cats and dogs. The downpour was so immense that we witnessed water was flowing like a river in the temple complex. Without 2 separate umbrella and blessings of Lord Shiva we would have been drenched to the core. 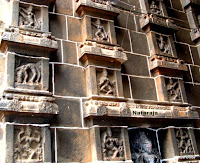 But who is the real architect behind this huge temple ? The most probable suitor is the Parantaka Chola I ( 907 – 950 ) who installed the golden tiled roof on the Chitsaba Subsequent Chola kings Paranthaka II , Rajaraja Chola I, Koluthunga Chola and Vikram Chola ( 1118 – 1135 ) have made substantial donations for the upkeep of the temple.

The antecedents of the temple is much earlier to Chola period, since the temple architecture is of older version. Some historians believe that the credit of the temple construction should be bestowed on Simmavarama II 430 -458. ( Pallava Prince ) The declaration made out on the copper plates confirms that he gave up his rights and settled in Chidambaram. It is believed that he was responsible for constructing the initial edifice, which later expanded by Chola kings.


Chidamabaram temple is built across an area spread over 40 acres, in the heart of the city. The temple is dedicated to Lord Shiva in his dancing posture known as Nataraja, a cosmic dancer. This dance form is also known as Tandava. Tandava is a vigorous form of dance symbolizing the cycle of pro-creation, preservation and ultimately destruction. These are categorized into Shrishti ( creation ) Sthiti ( conservation ) Samhara ( destruction ) Tirobhava ( illusion ) Anugraha ( Grace ) Whereas Rudra Tandav depicts the violent form of dance which heads towards destruction. All the dance postures literally 108 karanas are embedded on the Eastern Gopuram ( which is exposed in my video )

ETYMOLOGY The etymology of the word Chidambaram translates literally into Chit meaning Knowledge and Ambaram Infinite space. Thus Chidambaram signifies Infinity in Knowledge. The other interpretations of Chit and ambaram are Consciousness and sky. The third inference is to stage and sky, where Lord Shiva is performing the cosmic dance. Therefore among the five holiest of Shivaite temples Chidambaram ranks no 2. The other places are Thiruvannamalai ( fire ) Kanchipuram ( earth ) Kalahasti and ( wind ) Thiruvanaikaval ( water ). Thus Chidambaram is one of the important Pancha Bootha Stalas. 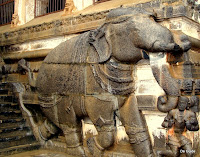 GATEWAYS :The temple has 9 gateways and we entered through the Eastern gateway where the 108 postures of Bharatanatyam is embedded on the façade beautifully. The rain was literally preventing us from going further without noticing the grandeur. Thus are the ways of Lord Shiva. I was transfixed to the exquisite form of sculpture and its conception and execution.

The gopurams are located in all 4 directions inviting the devotees from all corners of the world literally. The five Sabhas ( hall) of the temple are :

Kanaka Sabha Where the daily rituals are performed

Raja Sabha Where yoga is performed

Deva Sabha Abode of all the hindu gods such as Ganesh, Parvathi, Murga, Chandikeshva and Somaskanda

WATER BODIES There is a popular saying that the standard of civilization is determined by how the society or government maintains its water bodies. In this direction the credit should go to the patrons of the temple to have an elaborate system of ponds around the temple for harvesting rain water literally. 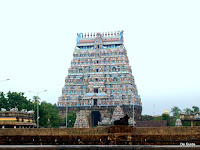 GOVINDARAJA SHRINE : Chidambaram complex houses the Lord Govindaraja Perumal which is symbol of Vaishnavism. This depicts the secular fabric of the temple administration, which is not normally found in the Vishnu temples, because of intense rivalry.

The temple poojas or rituals are performed by Dikshitars. A class of vedic Brahmins who claim lineage from Mount Kailash. There was obviously scope for malpractises and mismanagement by private management. The govt. after protracted battle has taken over management of the temple. However the rituals are conducted by the Dikshitars.


FEAR OF INVASION : In 1312 AD the invasion by Malik Kafur on all the temples of the south prompted pre-emptive precaution by the Dikshitars. They removed all the precious jewels and statues and hid them. Some of the valuables were taken away to Allepey for safety. It is obvious that some never returned to the temple after fear of invasion subsided.

Overall visit to Chidambaram is refreshing and quite historical in terms of multiple myths associated with the temple. The purchase of the Guide book written by Dr S. Meyyappan on Chidambaram would reveal 88 pages of mythical association. In a hurry to proceed towards Velankanni I missed buying the CD of the temple.