The Darasuram group of temples is located around 7 kms away from the kumbakonam railway station. I was inspired by a blogger from Ahmedabad to visit this temple on priority when compared to Navagraha temples which is usually ventured as a matter of religious tourism to get rid of their doshas.

My gut feeling had come true to see the Darasuram unraveling as fresh as a daisy after a heavy downpour. Water was flowing all across the temple, and the water channels outside the temple too has been created to drain the water. This maybe due to the fact that the foundation may get eroded of the temple. The ASI has done a tremendous amount of work to resurrect the temple, which was in absolute crumbling stage. Currently one can find the local people taking a morning walk with pride on the precints of the temple garden. 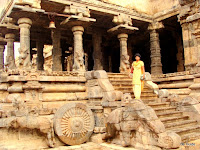 HISTORY : In the absence of an ASI guide books it is difficult to guess the antecedents of the temple. The temple was earlier known as Rajarajpuram. It obviously means that the temple was constructed by one of the kings holding the title Raja. There are so many Chola kings with the title of Raja,which is commonly bestowed on the rulers of the time. In all probability the temple foundation was laid during the reign of Chola King Kollutunga II ( 1133-1150) and completed during the reign of RAJA RAJA II ( 1150 – 1163 AD ).

Why the Cholas who were great builders of temples and monumental edifices went into the downward spiral is a mystery left to be unraveled. Most of the Chola temples are of Shaiva origin, and another religious section was slowly gaining ascendancy under the sage Ramanujam ( 1077 – 1157AD ) It obviously was felt that the followers of Vaishnavism were persecuted in the Chola kingdom and Ramanujam went into exile to propagate his beliefs from Melkote.

Like all great emperors Raja Raja II too had four wives and a retinue of courtesans for sexual gratification. The war of succession among the heirs, imminent attack from the Ceylonese kingdom and rebellion of feudals seem to have lead to the downfall of the empire. 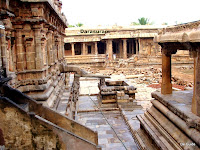 In all probability Darasuram Airateswara temple was completed in 1160 AD and it had approximately taken nearly 15 years to complete from 1145 AD. The construction which begun during the dying days of Kollutunga II and completed during the reign of RAJA RAJA II.

When an edifice of this nature is built naturally architects have to plan for good ventilation and drainage of rain water accumulating in the premises and to prevent seepage from the roof tops. This aspect was given prime importance apart from natural lighting entering the temple premise.


The placement of Nandi was of prime importance in Chola architecture, at Darasuram Nandi is enclosed in a small mantap. The Nandi is etched in soap stone which obviously seems to have been shipped from neighbouring state. The fact that some of the temples in Hemavathi region seems to have seen plundering for their strong granite structures is the basis of this surmise. On the edifice there is a contrasting effect of the statues installed of Shiva and arthanareswari. These sculptures are in black soap stone.

The façade of the walls seems to have been painted with various depictions and mythological stories during the reign of the Nayaks. They are all in various stages of destruction due to seepage of water and sunlight. It may the natures way of undoing the artificial embellishment.

The main goupuram or vimana stands tall at 85 feet. The frontal mantap is designed as a horse chariot drawn forward as it were during festivity. This inspiration form of architecture had become a hallmark for subsequent rulers to emulate in their temple building activities at Kumbakkonam. The main temple is now known as Airavateshwar Temple. The adjescent temple is Periya Nayaki amman temple or Parvathi.

Airavat happens to be white elephant of Indira, who worshipped Lord Shiva praying for its health. Even the fabled Yama, ( master of Death ) seemed to have prayed in this temple to get rid of the curse. Lord Yama was cursed by a sage, which lead to burning sensation in his body and he suffered immensely. Yama took bath in a sacred tank in front of the temple and prayed to Lord Shiva to get rid of the burning sensation all over his body. The tank from than on is known as Yamateertham.

Since the elephant worshipped the Lingam, the temple is now considered to be Airavateshwar temple.

The inscriptions embedded on the façade of the wall is a delight for all the connoisseurs and art historians. Most of the inscriptions have lavish praises for the kings of the time for sponsoring the temple’s upkeep by giving grants.

One of the inscriptions state that Pandyan king Maravarman gave grants for celeberating Shivaratri festival and undertaking repair of the temple. During the Tai masam, which was coinciding with Makara shankaranti too festivities were undertaken in this temple.


During the makara times Chola King Rajarajadeva registered a grant of land to meet the expenses of the temple and its upkeep. 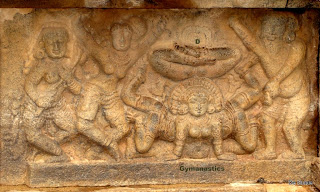 1. The idol of single breasted Shiva on the façade of the main temple.
2. Horse drawn chariot sculpture on the sides of the mantap.
3. Gymnastic posture of the comparable to modern circus or gypsies.
4. Lion attacking an elephant ( baby elephant ).
5. Delivery of baby sculpture, helped by attendants in standing posture.
6. Ravana carrying Kailash.
7. Sculpture of Buddha.
8. Saraswathi without Veena.
9. Sculpture of Devi with 8 hands.
10. Two Dwarapalikas at the enterance.

At the enterance there is small mantap which is gives out musical notes, which is now protected against vandalism by secure enclosure. The entire complex is beautifully landscaped with grass and small plants. The gopuram at the enterance seems to have collapsed, now only the side wall remain on the edge of the garden.

During the monsoon the temple look is so fresh and gleaming as if it is ceremonial bath for this temple. We were blessed with plenty of eye soothing greenery and were guided an ASI person who unlocked the museum for our benefit. There were number of statues which seem to have been transferred to Thanjavur museum according to our guide and ASI is in the process of setting up a full fledged museum at Darasuram too. The paintings on the wall ceiling are quite prominent in the museum enclosure too. One has to protect their camera during the rainy season, luckily the weather gods blessed us unlike the previous day ( 4/11/09 ) which was pouring cats and dogs. Darasuram temple is visual treat for lovers of ancient architecture and should not be missed if one happens to visit kumbakkonam,thanjavur or trichy

Posted by De Guide Travelouges at 5:35 AM