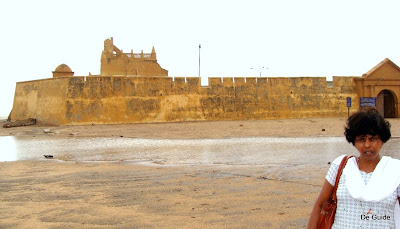 Many a tourist get confused between Dutch and Danish and my impression that Dansborg fortress was Dutch was proved wrong as soon as I visited the Tranquebar beach. The Ozone rich beach of Tranquebar was a pleasant way to spend our spare time where the hindu monuments are closed between 1 to 4 pm invariably. This place boasts of the second rich place on earth which contains a rich content of O3 ( signifying heavy oxygen ) after Swiss.


The ozone rich Tranquebar prevents the harmful ultraviolet from penetrating the atmosphere, which has a rejuvenating effect on the health of an individual breathing the air, which was a real surprise to me. No wonder the trip to Tranquebar and Velankanni did not make us sick due to constant drenching we had on fourth November 2009.

On 5th May 1620 a treaty was signed by Tanjore king Vijaya Raghunatha Nayak and King Christian IV to set up a trading centre at Tranquebar. Based on the agreement a sum of Rs 3111/- per month rent would be paid to the Nayak King as royalty for lease of land to Danish authorities. The document was signed with gold insignia and signed by the king in Telugu ( which is actually Kannada since Vijaynagar emperors belong to Karnataka ) This document is preserved in the museum at Copenhagen.


Fort Dansborg was built by Danish Navy commander Ove Gjedde, as a residence for the governor and other officials for about 225 years. Around the same time Roland Crappe ( first governor ) too bought some land and constructed other bunglows surrounding the Fort. 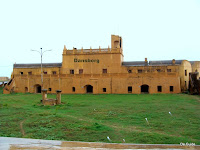 The fort stands tall on the Tranquebar golden beach. The ramparts of the Fort which spreads to the sea has been consumed by sea erosion. The crumbling fortress wall is being pounded by sea waves. The govt. of TN. Erected granite blocks preventing further sea erosion near the Masillamani temple in 2007. The area surrounding the Fort is left open and the beach around the Fort is a nice and clean landscape. It may be matter of time before the sea consumes the beach.
Dansborg fort housed a number of governors ( 35 in all ) starting from Roland Crape (1624 -1636 ) upto Peter Hansen ( 1841 – 1845 ) till the area was sold to the price of 12.5 lakhs.

A number of Danish ships visited the Tranquebar Port from Cophenhagen. They used to smuggle Tea from India and sell it in Britian at a huge profit. Since the decline of trading opportunities and Napoleonic wars saw the decline of Danish empire in India.

This fort is built with brick and mortar in a typical Danish architecture. The boundary walls of the Fort is almost 8 feet thick which stretched into the beach. The surrounding boundary wall of the fort is as thick as upto 15 feet with plaster of paris adorning the walls. The finish in yellowish tinge gives it a heritage look. The Fort area which is almost 100 feet x 80 feet width is having a built up area of one fourth its boundary. The inner ramparts were used to store merchandise and house the prisoners of war.

The governors residence was secured with watch towers and security men on all four sides of the fort. This building currently houses the ASI museum. The artifacts on display covers the entire gamut of Porcelain items and memorabilia from different parts of the world.

There are number of Hindu sculptures too which have been salvaged from the crumbling edifice of the shore temple. The history of the Danish has been well displayed with framed notices. The replica of the treaty signed between the Nayak and the Denmark king too is displayed.

Enterance to the Fort is from the south, which probably was one of the reason for the place not prospering according to the Vastu tradition. In fact there are instances of frequent break out of Cholera, dysentary and other diseases which consumed lot of Danish citizens. 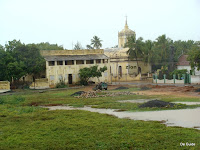 A holy shrine of Zion was built in 1701 by the Danish administration. The 300th anniversary was recently celeberated.
The first Protestant missionaries set foot in India were two Lutherans from Germany. Bartholomas Ziegenbalg and Heinrich Pluetschau started spreading their missionary beliefs from the time they landed in 1706.
Ziegenbalg was the first person in the history to preach Christianity in Tamil in the new Jerusalem Church. He had built this church in 1718 AD.

FIRST PRINTING PRESS IN INDIA:
Bartholomas Ziegenbalg is credited to have set up the first printing press in India during 1712 AD. They even produced the first printing paper along with printing in vernacular Tamil. They translated the bible and published the New Testament in 1715 AD. This was a historic development for the people of Tamil Nadu and Ziegenbalg propagated the development of Tamil language. He died on 23.2.1719. He was buried in the church which he built.

ZIEGENBALGS MEMORIAL :
Bartholomas arrived on the Tranquebar coast on 9.7.1706 under the order of the King Frederick IV of Denmark. He was under instruction to propagate the spread of Luther branch of Protestant. They built the new Jerusalem Church in 1718 AD.
He spent two years to master the tamil language and its meaning. He than started collecting rare manuscripts of Tamil written in Palm leaves. One such palm leaf literature was placed in the exhibition at London.

He translated a tamil book Ulaga Needhi ( universal justice ) into Germany too. It is now displayed at a library in Copenhagen. In this book he acknowledges the help rendered by tamil scholars and Brahmins in translating the book into Germany.
Another book published by him in 1718 AD is titled as An account of Malabarians which is available at London library.

During its hey days Danish Company imported more tea than the British company and sold it at huge profit in Britian itself. But the company fell into losses as the British tightened their checking procedures and imports into the country. A short blossoming unofficial trade was quickly dissolved and the company was closed in 1729. In 1730 AD a new company was established Asiatic company with a royal license conferred by the King.

The primary reason for the decline of the Danish Empire seems to be absence of revenue to sustain a colonial empire. The salaries paid to the soldiers and governors were miniscule, when compared to the British counterparts.
Records at the Museum state that It was impossible for the Governor to live a decent life on his 600 rix dollars a year salary. Even the Vicar found his salary of 176 rix dollars a year grossly insufficient to meet his ends.
All the officials were compelled to trade with local Indian traders by smuggling goods to Denmark which was profitable but fraught with risk. Young Lt. Passow was enterprising enough, who was a pauper when he landed in 1754, but after four years of trading activity he managed to build a bank balance of 9000 rix dollars. His official salary was only 150 rix dollars.

Unofficial trading even though forbidden went unpunished due the sheer fact that it was impossible to punish the majority of the citizens of the Danish colony. On occasions there was an uneasy truce between the inhabitants and management at Copenhagen. The company was mired with mountains of paperwork with complaints, suggestions, intrigues and sedition of sorts.
Audits meant harassment of the officials posted at Dansborg. The management had no understanding of the cost of living and compulsions of the officials stationed at Tranquebar. The management wanted better profit realization from the official trading.

Governor Peter Anker ( 1786 – 1807 ) who hailed from a well off Norwegian family was posted as a last resort to streamline the administration and trading in Tranquebar territory. He took his own time to study the lacuna for 2 years and started tightening the reigns of revenue leakage.
He had to tackle a powerful lobby of brokers or dubashes headed by Walter-Supperemania. He abolished tenancy rights for dubashes. This move deprived the officials of commission on rice harvesting and trading activities.


Peter Anker became a target of intrigues and sedition, including his own lieutant Franz von Lichtenstein was part of the conspiracy. Peter Anker was discredited in the eyes of Crown prince Frederick. But the king ignored the barrage of complaints against Peter and honoured him as Knight of order of Dansborg, which was the highest decoration of the times. After successfully completing his tenure of 21 years he was recalled. The debts accumulated during the tenure of Governorship by Peter Anker were so much that he had to bailed out of his debt trap and he approached some wealthy ladies to rescue him. However the king intervened and settled the debts.

Thus the sleeping beauty Fort Dansborg symbolizes traces of the Danish presence on the Coramandel Coast.


LOCATION : Tranquebar or Tharangalpadi is located 296 km from Chennai after Poompuhar. It is enroute to Velankanni on the ECR road. It can be reached from Maylatdurai and Nagpatinam railway head too. The nearest airport is Trichy. We took the route from Chidambaram on the ECR road with a Pondi permit taxi towards Velankanni.

Caution :Ashtma patients are required to avoid this destination which can cause allergic reaction in OZONE rich environs. It is good antidote for heart disease.

Posted by De Guide Travelouges at 3:49 AM